The “Surroundie” Could Be the New Selfie

Over the past few months I’ve been experimenting with 360-degree cameras and I’m very excited about this new format.

My interest started back in January 2014 when I backed the quirky Panono camera on Indiegogo. This ball-shaped device with 36 individual cameras produces high-quality full-surround pictures and has really captured my imagination. I’ve also purchased a Ricoh Theta S, a smaller device with two fisheye lenses that creates 360-degree photos and videos. I’ve been having a lot of fun with these two devices and have learnt a lot about this format of photography.

I’m increasingly convinced it’s a format with real potential, and not just because 360-degree cameras are becoming more accessible and affordable. I believe it’s the ability to easily distribute the resulting images that’ll be the market-maker.

Historically, one of the biggest challenges with new types of content is distribution. With Blu-ray you needed to buy a new player, with 3D you had to invest in a new TV and glasses. When it comes to 360-degree content you can already reach an audience of over 1.5 billion people through Facebook and YouTube. Despite popular misconceptions, you don’t need a virtual reality headset to look at 360-degree content — you can see it on any screen, be it a PC, tablet or a smartphone. You can easily scroll around the image or video using your finger, mouse or stylus.

We’re already seeing lots of professionally created 360-degree content available, such as trailers for movies, the most prominent example being this Star Wars trailer. There’s also other content, such as current affairs footage; this example from Jaunt VR covering the Nepal earthquake is a perfect example.

But it’s self-created material that will emerge as the biggest source of 360-degree content, and my long-held vision of a world where friends and family can easily “see what I saw” is finally coming true.

I think we’ll see the creation of a new image category that I’m calling the “surroundie”. You only have to look at the phenomenal rise of the selfie to see the potential. Why just share a one-dimensional flat photo, when you can share your entire surroundings?

Here’s a great example of a surroundie taken during a recent break in Cornwall. It’s essentially three photos in one: the spectacular view out to sea, a selfie of me and my youngest son, and the great view over the beach. 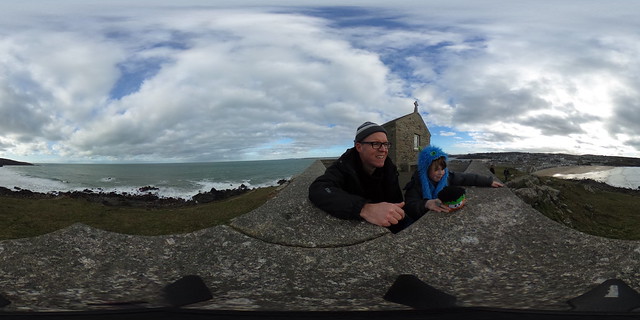 And it’s not just limited to photos. Here’s a 360-degree video of the recent launch event held by LG at Mobile World Congress. It’s such an immersive medium.

This is a surroundie of TAG Heuer’s press conference at Baselworld 2016, taken with the Ricoh Theta S. 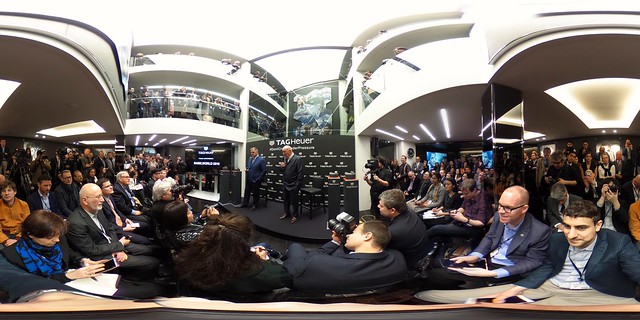 And here’s a shot of the South Bank in London, taken with the Panono. Note you can zoom in for a better look, thanks to the Panono’s superior image quality.

With the impending arrival of 360-degree cameras from LG and Samsung it won’t be long before the full force of their marketing machines starts promoting this new format, leading to an explosion of 360-degree photos and videos.

The stage is set for a huge rise in consumer awareness of this new format; the 360-degree camera will be on the gift list of every affluent gadget-lover this Christmas. Assuming we don’t all have them by then: since I started showing people my 360-degree images, four friends have ordered a Theta S camera for themselves.

If 360-degree content becomes the new cool way to share experiences on social media, it has a very bright future.

Drones Gain the Power of Sense

Securing the Internet the Los Alamos Way
Scroll to top