As Pressure Intensifies, Carriers Deploy New Strategies to Drive the Next Wave of Growth

The leading US carriers have published financial results for 4Q14, and three main themes are apparent as networks jostle for position in an increasingly competitive and evolving market. Full analysis of each carrier will be covered in Quarterly Market Analysis: Mobile Operators, North America, 4Q14.

Verizon’s chief financial officer, Fran Shammo, said that the company aims to significantly increase tablet penetration from the current level of just 8%. He outlined a huge opportunity that would be boosted by lower churn among tablet subscribers and tablets’ smaller subsidy compared with smartphones.

However, T-Mobile CEO John Legere was keen to point out that tablet users are less valuable to carriers than smartphones subscribers as they generate lower service revenue. In 4Q14, most of T-Mobile’s branded post-paid net additions were again mobile phone customers, with less than 20% from tablets or other mobile broadband devices. 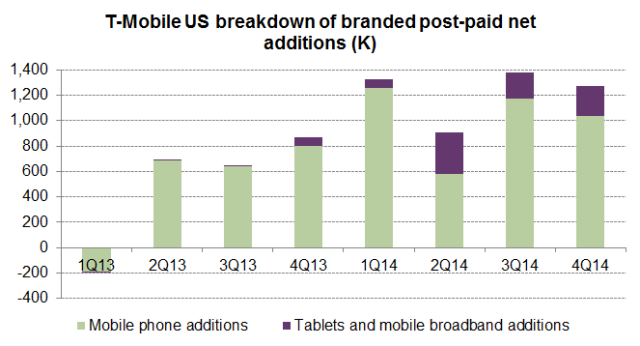 Churn up as Competition Intensifies

The “big four” carriers all reported an increase in post-paid churn sequentially and year-on-year as competition continued to ramp up. T-Mobile still leads the charge, with its Data Stash initiative enabling customers to roll over unused data to the following month. Sprint recently said that it would allow subscribers of AT&T or Verizon to halve their bill if they switch from either carrier, and expects this — combined with its recent introduction of new rate plans — to encourage a fall in churn as soon as 1Q15.

However, AT&T and Verizon have also made competitive moves. Verizon has been the most resistant to participate in the US price war, and outlined on its earnings call that it wouldn’t chase customers if it didn’t make financial sense to do so. However, the recent $10 reduction to its 1GB shared data plan amounts to a substantial 25% price-cut, and clearly illustrates that the carrier is also feeling the effect of the new market dynamic.

Carriers again reiterated the quality of their networks. Sprint was the most vocal, having seen further customer defection during 2014 as a result of poor performance. CEO Marcelo Claure said that making improvements was the number-one priority for the carrier. It’s now completed nationwide deployment of voice services at 800 MHz and announced plans to use carrier aggregation technology to combine TDD and FDD spectrum holdings across all bands.

The reporting season coincided with an important spectrum auction for mid-band frequencies between 1700 MHz and 2100 MHz. A total spending of nearly $45 billion far exceeded expectations, and illustrated the value of bandwidth to satisfy the surge in demand for data services.

AT&T was the biggest spender, splashing out more than $18 billion. However, the significant $10 billion investment by Dish Network suggests that it could harbour ambitions to one day offer mobile services. A possible scenario is to partner with T-Mobile, a move that Mr Legere said on the earnings call that he would be open to discuss. 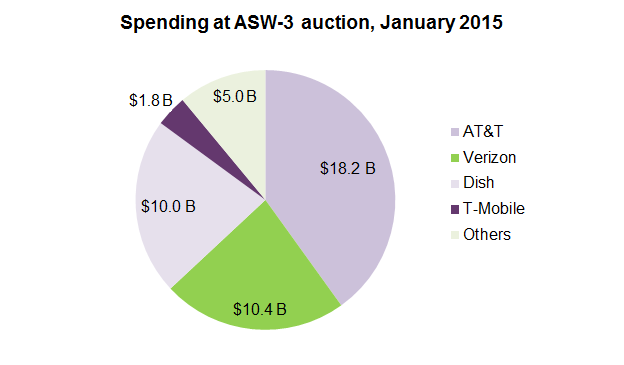