London, 20 March 2019: Growth in the market for smart wearables is set to continue, according to a new report by global technology research firm CCS Insight. Sales of smart wearables are predicted to reach 142 million units worldwide in 2019. The company expects that greater adoption of smartwatches, smart hearables and smart shoes will lead to sales of 260 million units in 2023, creating a market worth almost $30 billion.

Sales of wearable technology rose 29% in 2018 to 121 million units, with smartwatches and sports watches notching up sales of 74 million and gaining ground on fitness bands. Apple performed extremely well, as more and more iPhone owners bought the latest Apple Watch products. This boosted the company at a time when, like other smartphone makers, Apple are having to contend with slowing sales of smartphones. CCS Insight estimates that Apple sold 26 million Watch units in 2018, leaping 63% over the year. These sales accounted for an impressive 65% of the value of the smartwatch market in 2018.

Ben Wood, CCS Insight’s chief of research commented, “The Apple Watch has become a halo device for the whole smartwatch category. Other manufacturers are benefiting as people with Android smartphones jump on the smartwatch bandwagon. This is evident in the progress being made by suppliers including Fitbit, Fossil, Garmin, Huami, Huawei and Samsung, which all sold more smartwatches in 2018”.

CCS Insight believes that more Android smartphone owners will buy a smartwatch if they are given the right combination of product, brand and price. Fitbit’s success with smartwatches is a good example of this, and has prompted the research firm to take a more optimistic view of the market. CCS Insight expects 90 million smartwatches will be sold in 2019, rising to 162 million units by 2023.

Smartphone makers have been active in the smartwatch category for several years, and CCS Insight notes that Samsung and Huawei saw sales expand in 2018. Wood comments, “Given the strong positions of Samsung and Huawei in the smartphone market, we believe their ambitions for growth in smartwatches and broader categories of wearables are well-founded”.

Traditional watch brands have also set their sights on the smartwatch market, mostly relying on Google’s Wear OS platform. Leading the charge is Fossil, which CCS Insight estimates sold 3.5 million smartwatches in 2018 under a variety of different brands. Other players include Casio, Guess Watches and Mobvoi, the company behind the TicWatch brand. Premium names Louis Vuitton, Montblanc and TAG Heuer are also active in the smartwatch category, and have all already shipped at least two generations of Wear OS products.

Wood notes, “The growing support for smartwatches by well-known watch brands is encouraging after the disdain heaped on the technology at the industry’s premier event Baselworld, shortly after the launch of the Apple Watch. Having initially dismissed such devices as a gimmick, some of the more progressive watchmakers now realize they must invest in new technology to remain relevant to a new generation of watch buyers”.

Although full-touch advanced devices like the Apple Watch are the most prominent examples of smartwatches, a huge chunk of the market is occupied by simple cellular watches targeted at children. CCS Insight estimates that 27 million smartwatches for kids were sold in 2018, of which 25 million were in China. Wood adds, “New features like video calls and contactless transactions for school registration or lunch payments are establishing themselves as popular applications on some of these devices, in addition to the standard functions of voice calls, messaging and location tracking”.

CCS Insight expects the market in China to continue to flourish in 2019. Outside China, kids’ smartwatches have made their biggest impact in the US, where the research company believes that growing interest from carriers will coincide with the arrival of popular child-centric brands. This will lead to sales doubling in the US in 2019.

Another important category is smart sports watches, which represent several million units each year. Suppliers such as Garmin and Huami, with its Amazfit label, dominate the market and this remains an attractive niche despite a drop in the number of companies competing in this space. CCS Insight estimates that about 7 million sports watches will be sold in 2023.

Fitness bands returned to growth in 2018, with shipments of 44 million units, up from 39 million in 2017. Huami’s ranges of Xiaomi-branded and own-brand products accounted for 56% of global sales, thanks to geographic expansion, especially in Asia. Growth has been spurred by Huami’s low retail prices, especially when combined with Xiaomi’s ever-strengthening brand. CCS Insight expects this positive momentum to continue in 2019.

In contrast, Fitbit has seen its shipments of fitness bands slow, as demand in Western markets has shifted to smartwatches. Nevertheless, the manufacturer recently confirmed its commitment to this category, announcing its Inspire, Inspire HR and the child-centric Ace 2 bands. Wood highlights that “fitness bands remain an important category, but the race to the bottom on pricing is squeezing margins hard. In Western markets there’s a clear shift from fitness bands to smartwatches, which is a trend we expect to continue unabated”.

Smart hearables are a product category that should not be ignored. CCS Insight expects them to form a major source of growth in the wearables market in the coming years. Wood says, “Although sales of smart hearables in 2019 are expected to be a modest 3 million units, the wider market for truly wireless in-ear headphones is witnessing explosive growth, as more and more smartphones lack a traditional 3.5 mm audio jack. Although the next wave of innovation is likely to centre on active noise cancellation, we don’t think it will be long before smarter features are added to these devices. We project that over 23 million smart hearables will be sold in 2023, with a good proportion of this growth coming from a future variant of Apple’s already successful wireless AirPods”.

Last but not least, CCS Insight expects smart sports shoes to be the beachhead product in smart clothing. The firm forecasts that 2.5 million pairs will be shipped in 2019, marking a modest start to a broader market with significant potential. 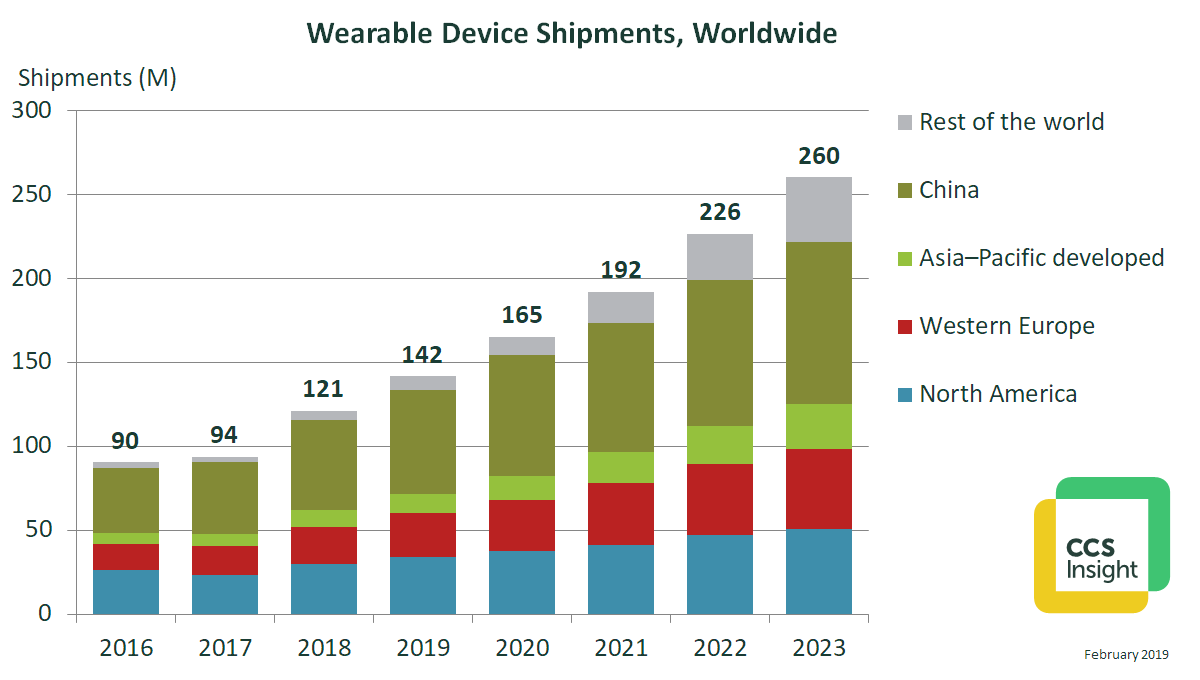 CCS Insight is a leading provider of wearables-related research. Its wearables forecast covers numerous product segments, including smartwatches, quantified self-devices (fitness, activity and sports trackers) and hearables (headphones with at least one additional feature beyond audio, for example, a heart-rate monitor, activity counter or an on-board processor for a digital assistant such as Alexa).

The forecast is part of a broader suite of wearables research that includes an extensive database of over 850 wearable devices, regular reports and monthly updates on the latest developments.

CCS Insight is a global analyst company focussing on technology. It provides comprehensive services that are tailored to meet the needs of individual clients, helping them make sense of the connected world. Follow @ccsinsight on Twitter or learn more at ccsinsight.com.

Mobile Phone Sales Are in Decline Scroll to top